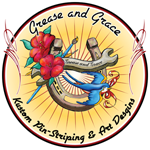 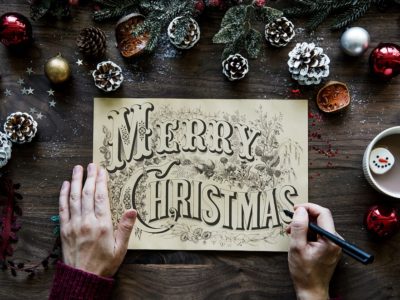 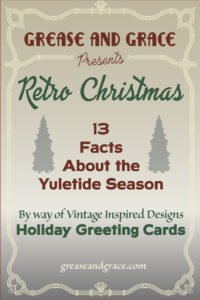 Grease and Grace Cards & Gifts brings you: Tidbits of Knowledge You Didn’t Know You Needed.

Historic Facts About the Christmas! Let’s have a look at some of the fun, and perhaps lesser known facts about the Christmas season we know and love. A series of 19:
“VINTAGE HOLIDAYS”
***
Christmas Card Sets featured here are part of our vintage collection, featuring designs inspired by Early  20th Century style, Art Deco, & Mid-Century modern.
Tap or click an image to learn more.

Have you decorated in a peacock theme? Peacock color scheme, or feather tree?

Peacock Christmas is inspired by the use of peacock imagery in early Christian paintings and mosaics. The icon was used as a symbol of immortality, a sentiment borrowed from the ancient Greeks, who believed the bird’s flesh did not decay after death. Its design is inspired by the early twentieth century style of Art Deco.

I’m actually fairly sure Ginger and Bing were never simultaneously in a movie, am I wrong?

I’ve always been inspired by Old-Hollywood style. From the silents and pre-code, to the 1940s. Classic Hollywood really exemplified the great artistic spirit of the age. This holiday card design in particular, borrows historic reference in both palette and graphics, of the Art Deco era. And for this, I decided, with the pretty mish mash of gold and pink, that it reminded me of a lovely dessert, hence, Ginger Cookies (Rogers) & Bing Cherries (Crosby), two of my personal favorites.
There isn’t really a fun fact about this one. I just really liked it.

Santa won’t you buy me a Mercedes Benz?

Are you tinkering with your car, even on Christmas morning? Can’t get out of the garage? This is a card for you! Share your love of vintage autos with our Mid-Century-inspired holiday cards.

Do you still use kraft paper to wrap? I love to do this and let my little one draw on the ‘print’!

In 1852, Francis Wolle invented a machine that manufactured flat paper bags. That invention was not improved on until 1870 by Margret Knight. She invented a machine that would cup, fold, and paste paper bag bottoms. Then, in 1883, Charles Stilwell invented a machine that made square-bottom paper bags that had pleated sides. Improvements were made in 1890 by William Purvis, who sold his patent license in 1891 to the Union Paper Bag Machine Co. That was the company that was founded by Francis Wolle and his brother in 1869. That company is now a part of International Paper. Even though those machines to make paper sacks were manufacturing them since 1852, the bags were more expensive than flat paper and string and therefore not purchased by many shop keepers until the early 1900s, when the price started to become comparable with the paper and string. — Tribune Star

Do you enjoy cutting fresh greens? I love the smell, so many pleasant memories tied in-to the scents of autumn and winter!

Have you ever wondered about ‘decking the halls’? To understand you must think back to the days of yore.  Before store-bought decor replaced Earth’s bounty as a decorative thanks for the years blessings, and for hope of a mild winter. and fruitful spring. These seemingly primitive origins seem to be lost in modern times. Do you like to bring nature in to decorate? I do! I love trimming fresh greens, and the smell is delightful!

Have you ever eaten a “real” sugar plum?

“The children were nestled all snug in their beds, While visions of sugar-plums danced in their heads…” We all know Clement Clark Moore’s “A Visit from St. Nicholas,” commonly known today as, “Twas the Night Before Christmas.” But do you know what a sugar-plum is, or isn’t, or was…? The term came into use around the 17th Century, definitely a vision for children in those days!

I’ve never spent a Christmas outside of my hometown, but if I did, it would be in Hawaii!

“Mele Kalikimaka!” You know the song by heart, you’re singing it now! Send Holiday greetings with a Christmas card that brings some Old Hollywood, nostalgic feelings to your friends & family.

I’ve seen that Christmas tattoos are becoming a trend, do you have one, or have you seen any?

Reminiscent of the tattoo art of the early 20th century, this holiday card features two swallows, a typical sailor’s tattoo. A perfect fit for rockabilly lovers, and those
interested in the vintage lifestyle!

Can you sing the song? A recent article I read said that millennials don’t even know it. I’d think that vintage lovers would recognize it from, “It’s a Wonderful Life” at the very least.

Auld Lang Syne is partially inspired by the Edwardian era, as it quickly slipped away at the approach of the the Great War.
“For auld lang syne” —for the sake of old times, lest they be forgotten.

“Should old acquaintance be forgot, and never brought to mind?”

It utilizes typography influences from the Art Deco Era.

Artificial, or real – What’s your druthers?

Before colorful aluminum trees were available, it was popular in the late 1800s to create white “Christmas trees” oneself, by wrapping strips of cotton batting around bare branches. In the 1930s, wealthy tree decorators would have the tree itself flocked for a snowy appearance (shave cream, and soap are two ways of achieving this look.)

During the mid 1950s aluminum trees became available in stores and were wildly popular until the mid to late 1960s. The end of that glitzy, gleaming era seemed to be spelled out by Charles Shultz’s, A Charlie Brown Christmas (1965). During the time in which aluminum trees boomed in sales, Sears catalog said,

“Whether you decorate with blue or red balls . . . or use the tree without ornaments – this exquisite tree is sure to be the talk of your neighborhood. High luster aluminum gives a dazzling brilliance. Shimmering silvery branches are swirled and tapered to a handsome realistic fullness. It’s really durable . . needles are glued and mechanically locked on. Fireproof . . you can use it year after year.” – Sears, 1963 Christmas Book

Myself, I prefer the green type, but have a definite love i nay heart for the shiny pink and white varieties.

Do you collect vintage ornaments?

Don’t you just love all those colorful, shiny, old mid-century ornaments? We sure do, too! That’s why we created our Mid-Century “Happy Holidays” Christmas card design to reflect the joy of the season and the era of nostalgia!

No matter what you celebrate, or how you say it – spread the message of peace to one and all!

Thanks for joining us on our little journey! We hope you enjoyed it!
Until next time —
XoxoX,
Deanna

DON'T MISS THIS ONE: Grease and Grace Celebrates *8* Years on Etsy with a Sale! (Plus: The Story Behind our Logo)

Deanna
VIEW ALL POSTS BY AUTHOR 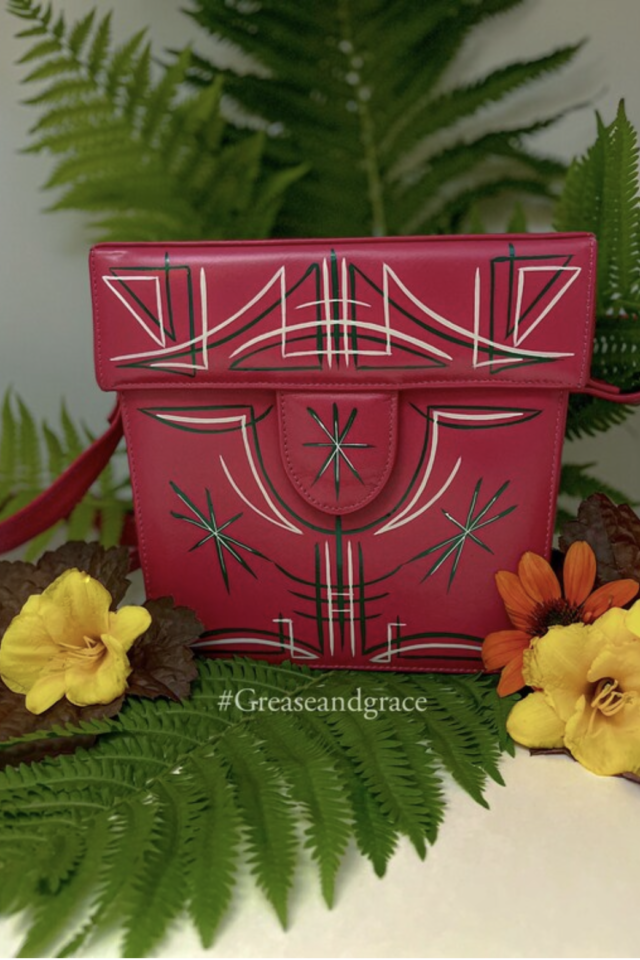 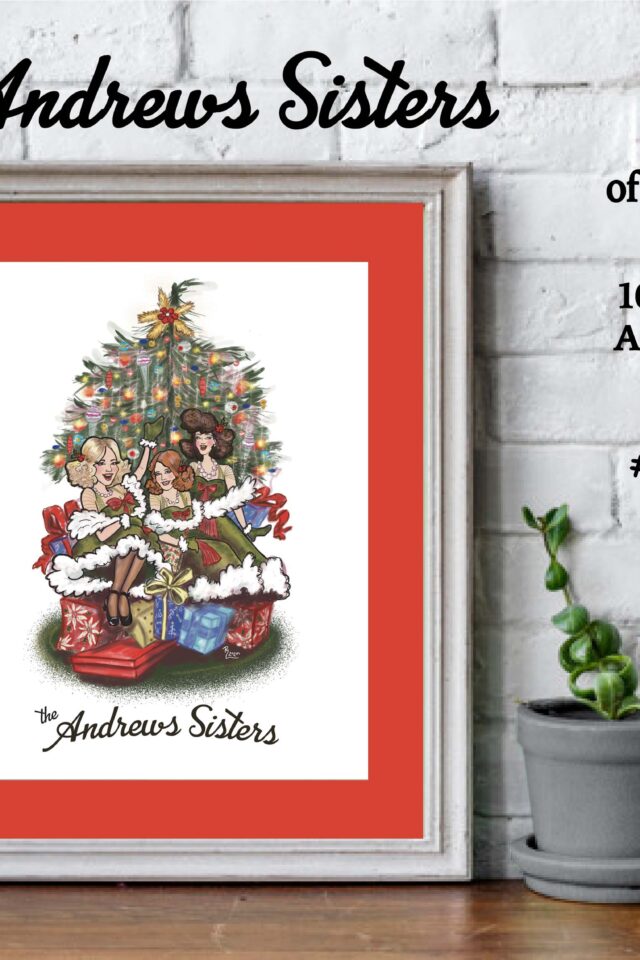 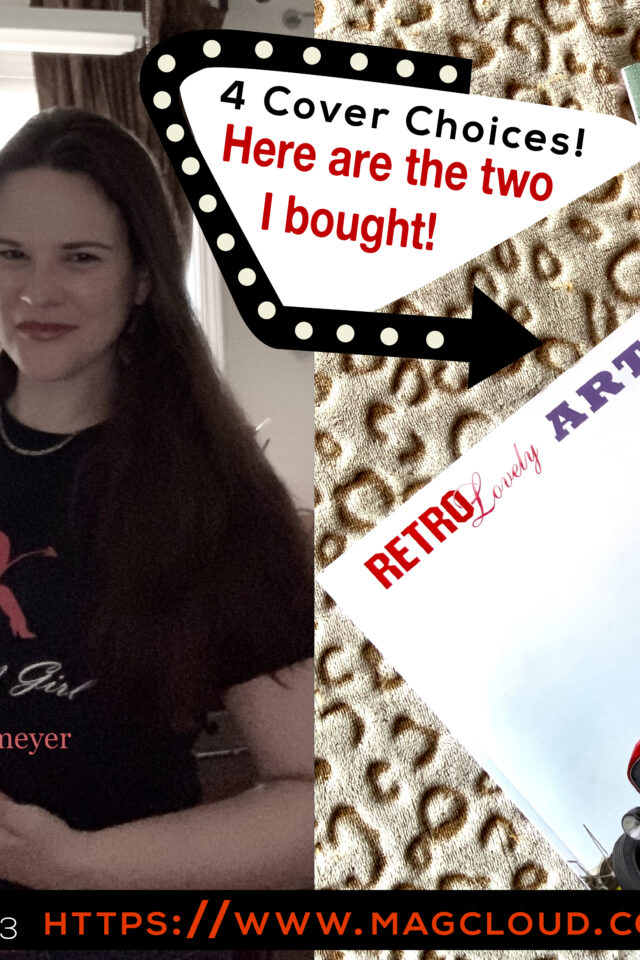